Nicotinamide Riboside (NR) is a recently discovered form of vitamin B3 that can increase levels of Nicotinamide Adenine Dinucleotide (NAD+). NAD+ is a key co-enzyme used by the mitochondria in every cell of our bodies. With aging our NAD+ levels unfortunately drop. The intention is that by supplementing NR (a precursor to NAD+) we can in turn increase NAD+, and make muscles, organs and tissues perform closer to younger versions of themselves.

Rhonda talked about this supplement in the Tim Ferriss podcast titled “Exploring Smart Drugs, Fasting, and Fat Loss”. Where she said (transcript source):

“ I mix in some other supplements like the meriva formulation of curcumin, which I already talked about earlier, and I am just starting to mix in a little nicotinamide riboside into the mix.

I’m afraid that the supplement I’m taking right now, which is by Thorne and only has 125 mg per capsule, won’t quite cut it to meet some of the robust results being seen in animal studies. I think there is potential here but more studies in humans definitely need to be done at this point. Still interested though. ” 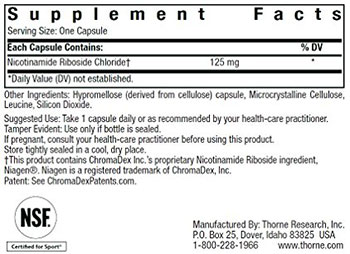 Rhonda previously discussed taking Thorne NiaCel, containing 125mg of nicotinamide riboside chloride, produced by Chromadex. However Thorne have recently discontinued this product, possibly because it was hard to compete with Chromadex’s own product; Niagen, which contains 300mg per serving as standard. On the plus side, NiaCel customers can switch to Niagen, and know it contains the same core ingredient.

Whilst pregnant Rhonda actually stopped taking any non-essential supplements (including Nicotinamide Riboside) that could pose even the slightest risk to her child. But she said in her March Patreon Q&A that she will carry on experimenting with nicotinamide riboside once she finishes breastfeeding.

Hello John, Thank you for your work. Actually Thorne discontinued that because they created Resveracel, which now has Includes 300mg or NR, as well as others
Betaine Anhydrous (Trimethylglycine) 50mg
Nicotinamide Riboside 300mg
Quercetin Phytosome 250mg
Trans-Resveratrol 150mg

Thanks Wallace! Appreciate the info.

A company called Alive by Nature discusses the greater bioavailability of NMN relative to NR on their website. They also sell NMN. I’ve decided to take both NR (500 mg) and NMN sublingual (500 mg). I am still up in the air about this.

I’m interested in these two supplements as well. Are you still using them and if so have you stayed with the Alive by Nature brand?

Hi Ignatius, after a year taken these two supplements how do you feel? Because I got the same idea, and I am hesitating about it.I most appreciate your reply. Thanks. Ruth