Lets dig into what PQQ (Pyrroloquinoline Quinone) is and why we might want to supplement it.

But first, if you’ve arrived here to learn more about how Dr Rhonda Patrick is supplementing PQQ, lets address that: 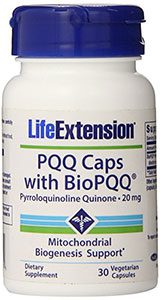 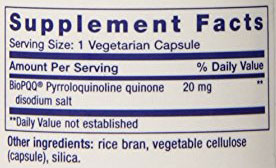 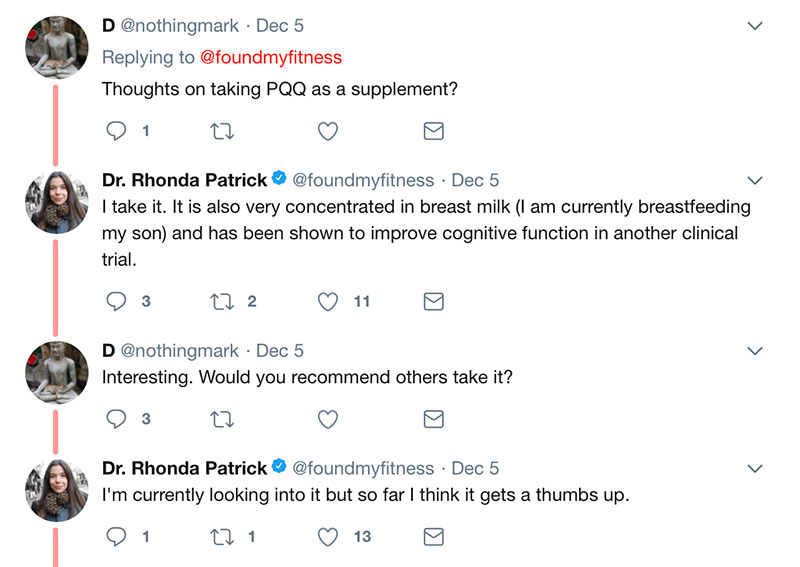 PQQ is a catalyst for energy producing reactions in the mitochondria of our cells.

PQQ has some evidence to show it improves mitochondrial function and lowers markers of inflammation. However, more study is needed. Mitochondrial function, which is responsible for energy production in our cells, gets worse over time as we age – so that’s why its important to boost it. Rhonda quotes PQQ as having 20,000x times the antioxidant affect of ascorbic acid (vitamin C).

What do the studies say?

Dr Rhonda Patrick previously linked to a study on Twitter that showed positive improvements in blood markers, consistent with what the researchers would expect from enhanced mitochondria related functions. 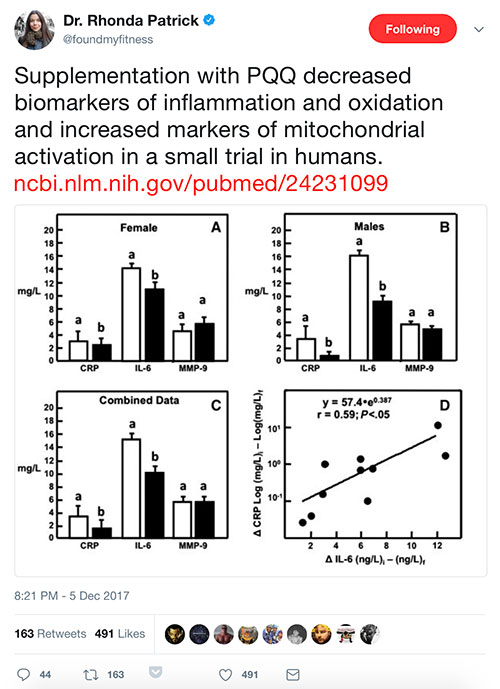 However, one early red flag is that the study had a sample size of 10, which is low enough that it should be interpreted with caution.

There are 3 interesting studies (that I’ve found thus far) on PQQ supplementation within humans:

There are more studies on PQQ, but mostly in rats and mice.

There are a couple of red flags with studies 2 & 3. The first is that the paper titles both mention a Trademarked brand of PQQ – so its likely that the company who created the particular supplement (Mitsubishi Gas Chemical Co. specifically) are backing the studies with vested interest.

The second red flag relates to the actual content of the papers. Paper 2’s abstract says:

“At the Meeting of the International Society on Oxygen Transport to Tissue (ISOTT) 2014, we reported that PQQ disodium salt (BioPQQTM) improved cognitive function in humans, as assessed by the Stroop test.”

Here they are referencing their own previous paper (paper 3 above), where they used the cognitive performance test (stroop test) to measure subjects performance before and after taking the supplement. However, when you dig into that previous paper’s results (not just abstract), its pretty crazy how they get from their results to the conclusion. In fact, its so bizarre I’d call bullshit on it.

It was expected that the SIs and RIs would decrease between 0 weeks and 12 weeks only for the PQQ group if the 12-week intake of the substance improves participants’ cognitive ability. We did not observe such a decrease in either the SIs or the RIs. These data show no effects of PQQ on cognitive ability

Lets just re-state that… “These data show no effects of PQQ on cognitive ability”. Noted.

Then they go on to say that if they remove 3 outliers from the test (there are only 41 participants total), then re-analyze, it shows something different:

In other words, results between week 0 and week 12 got worse for both placebo and PPQ groups. However, results were less worse for the PQQ group, therefore they say:

So rather than PQQ can improve brain function, they say it “can prevent a reduction of brain functions”. And they had to remove “outliers” from the results to even draw that conclusion.

I’d say they need to figure out why after 12 weeks all their participants did worse. And maybe don’t cherry pick which participants to remove from the analysis.

I could rant more about the two Nakano studies, but suffice to say, I’m not convinced.

Is PQQ worth supplementing?

The answer to this really depends on who you are. Currently the evidence for its effectiveness is tenuous, and needs more research. If you’re like Dr Rhonda Patrick, and already have ALL your nutrition and supplementation dialled in, then supplementing PPQ is like the cherry on the top (if it really is effective).

However, there are a slew of other aspects to your diet you should focus on before adding cherries. Aspects that have really solid data behind them, and will absolutely make a positive difference to your long term health.

Step 1: Look at your diet, and ask if you’re getting a good daily supply of various different types of vegetables.

Step 2: Make sure your current supplement stack is dialled in. Its function is to catch the slack on any deficits in your diet. You can refer to Dr Rhonda Patrick’s Supplement List for recommendations. Your base ought to consist of the essential micronutrients. For example:

Step 3: Look into Nicotinamide Riboside, which currently has stronger science behind it than PQQ for anti-aging properties. Rhonda is using Thorne Research – NiaCel.