NextIs flying safe with the coronavirus? How to reduce your risk on planes
Uncategorized

FastLifeHacks.com runs on WordPress software, and back in 2018 it was hosted on cheap shared hosting. This was great for a while, but eventually I outgrew it.

Back in 2018 I didn’t know much about servers, I just knew I needed something faster. After some Googling I realized the following were popular options:

Both of these appear to fall under the category of “Managed WordPress Hosting”. They offer tiers of service based upon the number of sites you plan to host, as well as amount of storage and monthly visitors.

Both struck me as potentially good options, but were more expensive than I had budget for.

For example – the bottom tiers of both services limit the number of sites you can host on them to 1 or 2, and I wanted to be able to host more than that! (I have a couple other sites I keep running for family members).

However, jumping up to the next tier of hosting was going to work out between $750 (MediaTemple) and $1,150 (WPEngine) per year. Juxtapose that with where I was coming from – paying $27/year with Stablehost – and that was quite a step up!

So what is a VPS? It stands for “virtual private server”, and sits in between shared hosting (which I was on) and dedicated servers – which give you a whole server to yourself. Whilst the latter might sound great, it’s expensive. What a VPS does, is to segment a server into sections, each with their own hard disc space, RAM and CPU quota. Giving you more power than shared hosting typically does, but without costing an arm and a leg! Pricing example:

Examples of VPS services include:

The only “problem” with a VPS, is that you have to provision and manage the server yourself. This typically means setting a Linux server up from scratch, so that it can support your website, and then making sure it stays secure and up-do-date. All done through the command line interface.

A previous attempt I made at doing this taught me that it’s a whole realm of expertise you have to learn, and that can take away from time spent on the stuff you “should” be doing.

So whilst I much preferred the pricing on the VPS options, it still wasn’t ideal.

I can’t remember exactly how I stumbled across Cloudways, but it probably involved a lot of Google and Reddit searches.

They offer “managed VPS hosting” – which seems like a category invented for people like myself, who wanted the power of a VPS server, without the complexity.

This meant that rather than provisioning the server manually, I could use their web interface to select their “optimized” WordPress install, select the server package, and have it installed just like that. With Cloudways handling the server updates and security side of things. 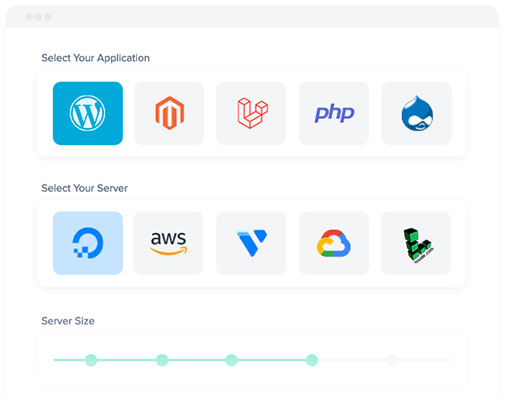 In terms of pricing, you pay more than you would if you were only paying for the VPS. For example:

Essentially it’s about double the price for each tier on Cloudways. Which, at the higher ends, might work out to be expensive. But at the lower end, which is where I am, the price premium was workable. My decision process went like this:

Fortunately the gamble paid off, and having used Cloudways since 2018, I can say I’ve been pleasantly surprised.

So far I haven’t run into issues with server speed or capacity. That said, the most users I’ve had in a month is around 400,000. What happened if I had 2x or 5x this number? I’d likely need more capacity. Fortunately, upgrading to a higher tier is relatively painless (apart from the added cost!) 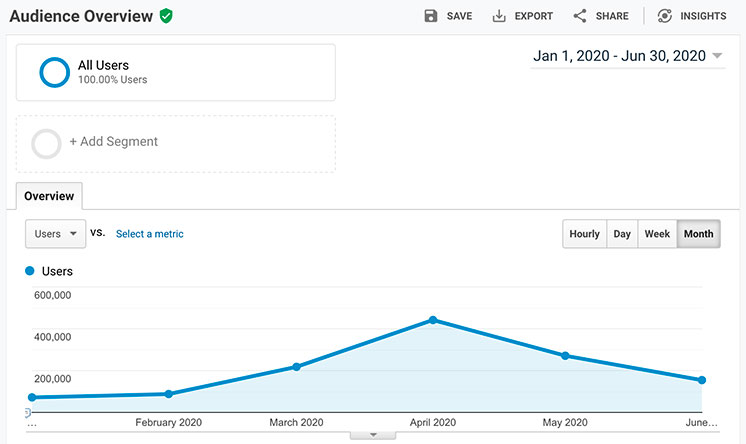 With proper web development, you’ll often have a server (or two) that mirror the live server, in order to test out software updates. With WordPress sites this is particularly useful for testing out changes to plugins or themes. The last thing you want to do with a busy site is deploy changes to your live server, and have it breaks things. Especially if you don’t notice until some time later.

Typically the live server that users are visiting is called the “production” server, and the server used to test things out on is called a “staging” server.

The thing is, most WordPress users (like myself) are not proper web developers (and don’t want to be, either!). Therefore, the option to easily add a staging server is very useful.

It’s not hard either. Once your “application” (in this case WordPress) is setup, you go to “Clone App/Create Staging” in the Cloudways dashboard to set it up: 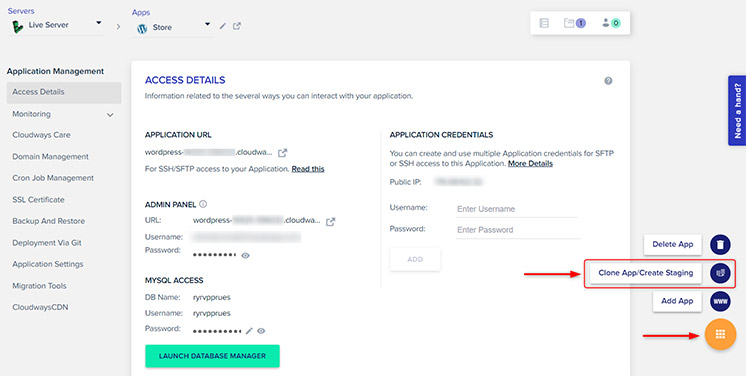 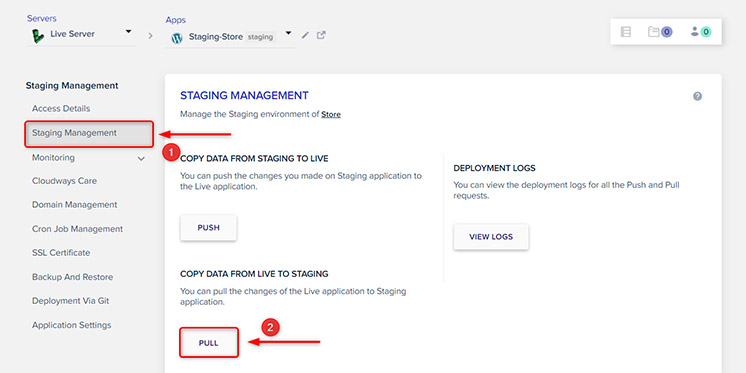 I shared the screenshots just to show it’s not rocket science to setup. For actual details on how to do it, follow the guide on Cloudways site here.

As is almost inevitable when you’re just getting acquainted with a new service, you’ll have questions. I certainly did! To tackle that, Cloudways have a good real-time chat service, and I was pretty impressed with it. It’s certainly quicker than creating a trouble ticket. Once or twice after the real-time chat I needed to wait for follow-up via email, but it was fairly painless. 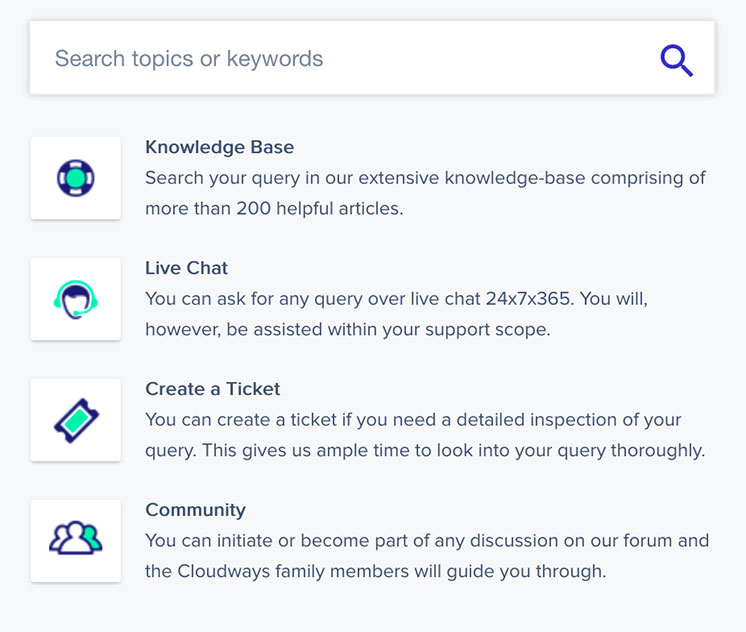 Easy to configure email – no need to self-host

One of the things I took for granted using shared hosting via CPanel, was the built-in email hosting it provided. However, when you move to a VPS solution, you don’t get that by default. One option is to manually configure the server to run a mail host, but that can be a challenge in itself. Another is to use a separate mail hosting solution – which is the route I went down.

Currently Cloudways offer this service via their “Add-Ons” section, where you can choose to have Rackspace host your email for $1/month per email. This isn’t too pricey if you only have 1 or 2 email accounts, but can add up if you have more.

Initially I went the Rackspace email route, and it worked well. Then later I switched to another email provider that worked out cheaper.

Similar to how email is easy with CPanel, so is updating the PHP or database versions. With a VPS, this has the potential to be a messy process (if you’re administering the VPS server yourself). Fortunately Cloudways have also made this part easy.

One caveat to mention is that this update is applied to the whole server, and so if you have multiple different types of applications, you’d need to ensure they’re all compatible. Whilst I made sure all my wordpress applications were backed up prior to updated the PHP version, I didn’t actually run into issues with it. The transition was seamless.

Cloudways offer a free migration when you move to them (link). As a non-techie this sounded pretty great, just let Cloudways deal with the technical aspects of moving servers.

So back in 2018 when I moved to Cloudways, I took them up on the offer. Unfortunately, and I’m not sure why, it took longer than I had anticipated. A couple days into the process, I got frustrated it wasn’t done already, and cancelled the migration in order to do it myself (me, impatient? 🙄). This was a couple years ago now, so hopefully they’ve improved that aspect.

On the plus side it’s actually fairly easy to migrate WordPress installations, and once I got started, it took about half a day all-in-all + some waiting for DNS updates to propagate.

Beyond this problem, I honestly haven’t run into any further issues with the hosting 🙏🏻 Touch wood.

Hopefully this helps give an insight into how the site is hosted via Cloudways + how and why you might want to replicate this setup for yourself.

If you’re interested in trying out Cloudways, you can use the Cloudways coupon code FLH10 to get 10% off your first 3 months.

Note: Not a Medical Doctor or PhD. I'm a researcher and writer, with a focus on the subjects of health and longevity. My intent is to write about scientific research in an accessible, understandable way. If you believe something I've stated needs a reference, and I haven't done so, please let me know in the comments.