Dale Bredesen’s book The End of Alzheimer’s gives us a novel approach to first understanding, and then treating Alzheimer’s.

It differs from the approach typically taken by doctors and pharmaceutical companies, whereby they prescribe one or two drugs to help. Bredesen’s protocol instead identifies 36 different mechanisms contributing to Alzheimer’s decline, then gives the reader a blueprint for identifying which issues affect them individually, and how to fix them.

In 2018 Dale co-published a paper demonstrating reversal of cognitive decline in 100 patients, which helps adds credence to the claims.

Of course 36 mechanisms is a LOT – but not everyone will have issues with all 36. There is a general set of guidelines for optimal health that apply, which covers:

After that, the challenge for each individual is to figure out what their core problems are (using testing), then addressing them. 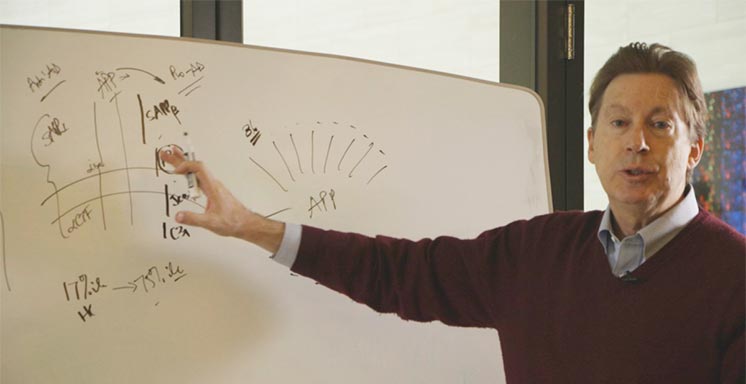 In this post we will look at 4 key areas to achieve a big picture understanding of the protocol:

Read on to learn more… 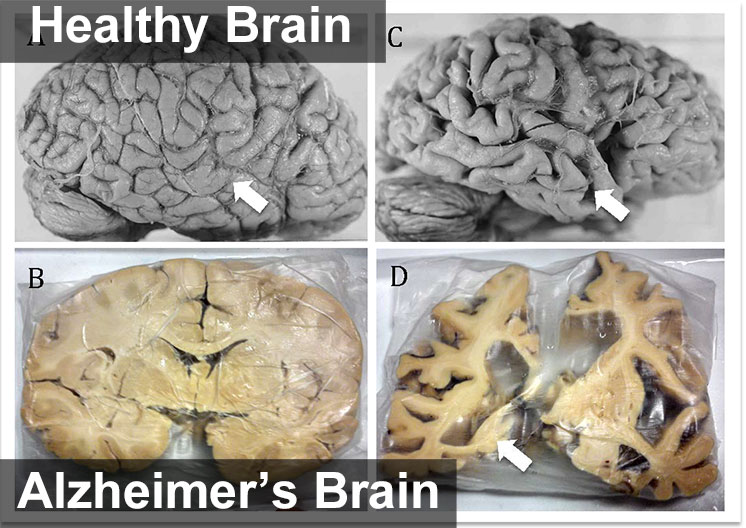 In this section we will explore the biological backdrop for how Alzheimer’s occurs, based on Dale’s research. If you want to skip this section you can, but I’d suggest it’s worth making the effort to at least get a high level overview. Much as when you go to a mechanic with an car engine problem, it helps to understand how the car works. Similarly with treating Alzheimer’s, it helps to understand Dale’s hypothesis for how it occurs, so you understand the why behind his treatment methodology.

Illustration showing the two different paths that brain cells can go down – healthy and non-healthy. Note that sAPPα and CTF-α are “good”, and sAPPβ and CTFβ are “bad” – all in addition to the Amyloid β which we already know not to be good. Like most things in biology, this is an oversimplification, but the sentiment holds (Image source)

If Dale’s theory is correct, then it helps us understand why drugs created to clear amyloid plaques haven’t solved Alzheimer’s. In order to clear existing amyloid, it means that the APP has already gone down the pro-Alzheimer’s path, rather than creating trophic factors that support healthy neurons.

Instead what we really want to do is to start fixing whichever of these 36 different processes someone has taking place in their body. Analogous to a house with 36 holes in the roof, you can imagine that you don’t need to fix them all, before you start to see benefits. 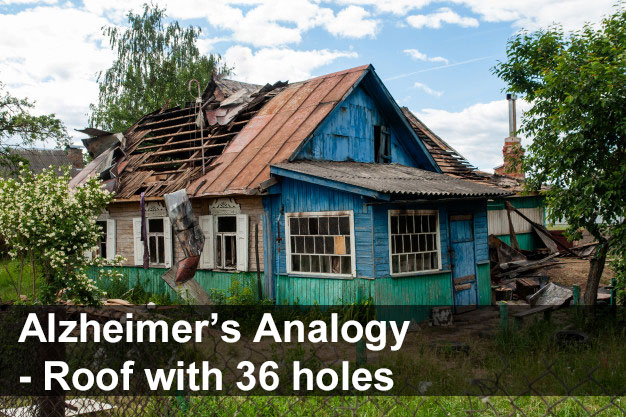 Much of the key innovation behind Dale’s protocol is his process for identifying and then mitigating individual risk factors for Alzheimer’s. This involves a wide range of tests, each backed up with mitigation strategies if the test results come back negative.

When you get to that section, you’ll see there’s significant complexity involved. Before we get to that, let’s start by looking at Dale’s suggestion of lifestyle modifications that should be adopted by everyone wanting to prevent or reverse Alzheimer’s.

The Ketoflex 12/3 diet that Dale recommends consists of 3 different parts:

Our our bodies preferential source of energy is glucose, which is derived from carbohydrates, and to a lesser extent, protein. When sources of glucose get low, our bodies switch to what are called ketone bodies, which are produced in the liver using fat stores. Using ketone bodies for fuel is referred to as ketosis, and it turns out that mild ketosis is optimal for cognitive function.

A diet that promotes ketosis is a low carbohydrate diet, targeting less than 50g of net carbs per day. The first step in achieving this is to cut out simple carbohydrates such as sugars, bread, white rice, white potatoes, chips, fries, candy, soft drinks and processed food. In place of them you’ll want to increase your healthy fats with things like avocados, nuts, olive oil and coconut oil.

To ensure you’re staying in ketosis, it is helpful to have a ketone meter. Unfortunately ketone urine tests are unreliable, so you’ll either need to opt for a blood ketone meter (gold standard) or a breathalizer.

Popular blood ketone meters are the Abbott Precision Xtra and the Keto Mojo. Popular ketone breathalizers are the Ketoscan Mini and the GDBow.

Dale suggests that this diet should be largely plant based – both cooked and uncooked, incorporating as many colors as possible.

If eating meat, it should be limited to less than 1g of meat per kg of body weight. More than that will increase the likelihood that it gets converted into glucose, which we want to avoid.

The ‘3’ in 12/3 refers to the minimum number of hours food should be consumed before sleep. For example, if you typically go to sleep at 11pm, then you should aim to finish eating by 8pm at the latest. This avoids an insulin spike before you go to bed (something that can contribute to insulin resistance), and allows for your food to partially digest before sleeping, which helps maximise sleep quality.

For those with the ApoE4 genotype should aim to fast for between 14 and 16 hours.

Dale explains that a big benefit of fasting between 12 and 16 hours is that it promotes autophagy, in which cells (including those in the brain) recycle components and destroy damaged proteins and mitochondria – making way for renewal.

More Specifics of the Diet

Whilst a healthy diet is the base, supplements should be used to optimize nutrition and cognitive protection. Dale recommends the following for everyone with cognitive decline or at risk for cognitive decline. The exception is if laboratory values are optimal for each parameter.

[1] For B vitamin supplementation in situations where homocysteine is above 6, try using the following doses to ameleorate:
– Pyridoxal-5-phosphate (P5P) form of vitamin B6, 20-50 mg/day
– Methylcobalamin (methyl-B12) and adenosylcobalamin forms of B12, 1mg/day
– Methyltetrahydrofolate (methyl-folate) form of folate, starting with 0.8/day, with a max of 5mg/day
Check your homocysteine again after 3 months to see if homocysteine has dropped to 6 micromoles per liter or lower. It generally will, but if it hasn’t, add 500mg/day of glycine betaine (also called trimethylglycine). Once again, check homocysteine after another three months. If still high, focus on reducing the methionine (the amino acid from which the body makes homocysteine) in your diet by limiting consumption of foods such as nuts, beef, lamb, cheese, turkey, pork, fish, shellfish, soy, eggs, dairy and beans.

Next Dale talks about herbs that provide supportive synaptic function. He recommends the following to be taken daily.

They say that sitting is the new smoking!

Suggesting you want to combine:

Ideally training 4-5 days per week, for 45 to 60 minutes in total each day. Emphasizing you should work up to this slowly, stretch lots, and take care of your joints!

If you don’t already have an exercise routine you feel comfortable with, he suggests seeking help from friends, family or qualified personal trainers to get you started.

Bredesen shows us that the first step when treating Alzheimer’s, or when working to prevent its occurrence, is to evaluate your possible risk factors and begin fixing those you’re most at risk for. You will see later in the post that there are a lot of possible tests that can be done. Therefore to aid diagnosis, he breaks Alzheimer’s into 3 subtypes; 1, 2 & 3. Using these delineations allows us to priortize diagnosis methods and treatments that are most applicable.

Type 1 occurs most often in those with 1 or 2 ApoE4 alleles – which tend to run in families. Most people carry 2 copies of ApoE3 which gives an Alzheimer’s risk of 9%. 75 million American’s (~25% of USA) carry a single copy of ApoE4, and have a risk of Alzheimer’s disease around 30%. 7 million carry 2 copies of ApoE4, pushing their risk above 50%. For those with ApoE4 for who develop Alzheimer’s disease, it is most often the inflammatory subtype.

Begins with a loss of ability to store new information, although long term memories are retained. Abilities we take for granted such as speaking, spelling, calculating are retained. In those with 2 copies of ApoE4, symptoms begin in late 40s – 50s. For those with 1 copy – symptoms being in the late 50s or 60s. For those with no copies – symptoms being 60s – 70s. The hippocampus, which converts experiences into long term memory, loses volume, but other parts don’t – at least not early on. However other areas do experience reduced function and speed.

Bredesen’s studies of patients with this form of Alzheimer’s disease have identified a set of biomarkers associated with type 1.

1) Increase in C-reactive protein – made by the liver as part of an inflammatory response to threats like infections.

2) Decrease in the ratio of albumin to globumin – This ratio decreases with inflammation – and is problematic because albumin helps by clearing toxins and amyloid from the blood.

5) Metabolic and hormonal issues – such as insulin resistance.

The good news is that Bredesen says type 1 responds quickest to his protocol.

This is the next most common type of Alzheimer’s disease for ApoE4 carriers – but initiates symptoms about a decade later than type 1.

The presentation is the same as type 1 – loss of ability to form new memories. A key difference is that there isn’t signs of inflammation. “Atrophic” Alzheimer’s disease comes about because supportive signalling for brain synapses is not being provided.

Whilst types 1 and 2 often occur in isolation, they can also occur together. Inflammation without tropic support for brain synapses.

Type 3 is caused by toxins and typically strikes people at a relatively young age – with symptoms beginning in the late 40s to early 60s. Often occurring after great stress. Unlike with types 1 and 2, it doesn’t begin as memory loss, instead it begins with cognitive difficulties involving numbers, speech or organisation.

Whereas the previous types cause “strategic downsizing” within the brain, preserving core functions, but not retaining new input, type 3 is not strategic at all. Both new and old memories are lost, and abilities we take for granted such as mental maths, finding words, reading and speaking can be affected. Depression and attention deficits can also be common.

It is common for type 3 Alzheimer’s disease to be diagnosed as something else, for example, frontotemporal dementia or vascular dementia. Spinal fluid analysis or a PET scan can confirm Alzheimer’s.

1) Affects many brain areas – not only, or predominantly, the hippocampus. With an MRI scan showing that multiple regions of the brain have shrunk.

3) Commonly low zinc, high copper – the ratio of copper to zinc should be about 1, with around 100mcg/dL each. With type 3 it’s common to see serum zinc in the 50s, with copper as high as 170mcg/dL.

4) Initially diagnosed as something else – as mentioned above

6) High levels of toxic chemicals in the blood – for example mercury or toxins produced by mould (mycotoxins). To measure the mercury you can’t rely on a blood test – because mercury often gets stored in tissue such as bone or brain. Instead you can use a chelating agent, which will help you excrete the mercury. You would expect to find elevated levels of mercury in the urine whilst chelating.

As mentioned previously – one of the key benefits of this subtyping of Alzheimer’s disease is to aid with treatment priorities, which can save time, money and energy. For example, if the symptoms are pointing towards sub-type 3 Alzheimer’s we can jump to testing for toxins, whereas for types 1 & 2 – testing for toxins would be low or non-priority.

4) Individual Testing – What do we need to test?

5) Individual Solutions – Once test results are in, what do we do?

So this is quite a long article, and it’s just a summary of Dale’s fantastic book ‘The End of Alzhimer’s’. To get the full details, if you haven’t already, I’d recommend buying it.

To recap on the above, this is one suggestion for how to process all this information:

Personally I found the amount of potential testing that needs doing a bit overwhelming, so you might too. In order to get further support with this you can sign up to one of Dale’s official programs (ReCODE or ReVERSE) via their website at Apollo Health.