Dr Rhonda Patrick has recently been discussing the benefits of curcumin. In this article we will look at the products she uses + the scientific studies and information behind curcumin’s benefits.

Let’s begin with the curcumin/turmeric product that Rhonda has been using: 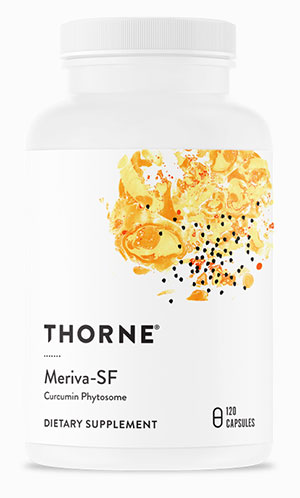 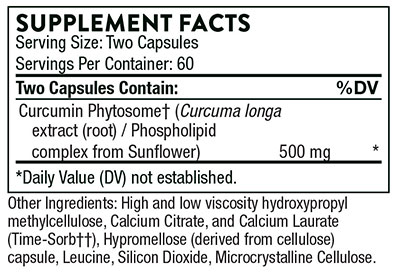 The difference between a curcumin phytosome supplement, like the above, and a “regular” curcumin supplement is bioavailability. In a human study comparing Meriva absorption to regular curcumin, Meriva was shown to have a 18-fold higher absorption rate than standard curcumin1.

The phytosome part of the name means that a fat based wrapper (in this case from sunflower oil) is formed around the curcumin chemical. I couldn’t find the exact mechanism of action that leads to greater uptake by our cells, which would be interesting to know.

What is Curcumin? Curcumin vs Turmeric vs Cumin

Before we go any further, lets just clarify what we mean by curcumin.

Curcumin comes from the turmeric root, and is the bright yellow chemical that has a propensity to dye everything it comes into contact with (it’s what gives curries their yellow color).

Not to be confused with cumin, which is a different plant entirely. Cumin, is also used a lot in Indian cooking, and literally contains some of the same letters as curcumin.

These other curcuminoids also exhibit anti-inflammatory properties2, so are useful. Fortunately they get extracted at the same time as curcumin, so if you’re consuming a curcumin extract, it will contain DMC & BDMC also. In the approximate ratio of 77% curcumin, 17% demethoxycurcumin and 3% bisdemothoxycurcumin3.

The turmeric root on the left and its dry, powdered version on the right. Powdered turmeric is not the same as curcumin extract.

Difference between Turmeric and a “Curcumin Supplement”?

When you’re consuming a curcumin supplement, it typically means that the (approximately) 5% of curcumin present in turmeric has been extracted using a solvent4.

This way, the powder you end up with is in the range of 95% curcumin, rather than ~5% curcumin if it was a turmeric powder.

One of the key mechanisms of action behind curcumin is its ability to reduce chronic inflammation. Inflammation itself is not a bad thing, in fact its an essential survival mechanism that helps our bodies fight illness and heal injuries. Essentially what we mean by this is, when there’s an infection or physical trauma, we want inflammatory signals to communicated, such that the immune system, and other key systems can take action. However if there’s chronic inflammation, or inflammation in the wrong places, we have a problem.

Proteins within our body called cytokines control cell signalling to stimulate or reduce inflammation. When this system has issues regulating itself correctly, it results in unnecessary inflammation of the body. Curcumin has been shown to regulate the release of pro-inflammatory cytokines. Examples of this include:

Whilst the above is a “core mechanism” behind why curcumin is beneficial, there may others.

Lets now look at some of the practical uses behind curcumin:

Pain Relief (Including for Arthritis)

People with arthritis are often battling chronic, day to day pain, and thus are among the most frequent users5 of non steroidal anti-inflammatory drugs (NSAIDs) such as ibuprofen, aspirin and indometacin. The major risk with chronic use of NSAIDs is gastrointestinal complications – ranging from regurgitation/heartburn to bleeds and ulcers6. Therefore, a substance that can reduce pain, with less side effects than NSAIDs is highly desirable.

Below Rhonda cites studies where curcumin supplements were comparable to NSAIDs. If you click the pictures they will take you directly to her tweet, which includes the study links. 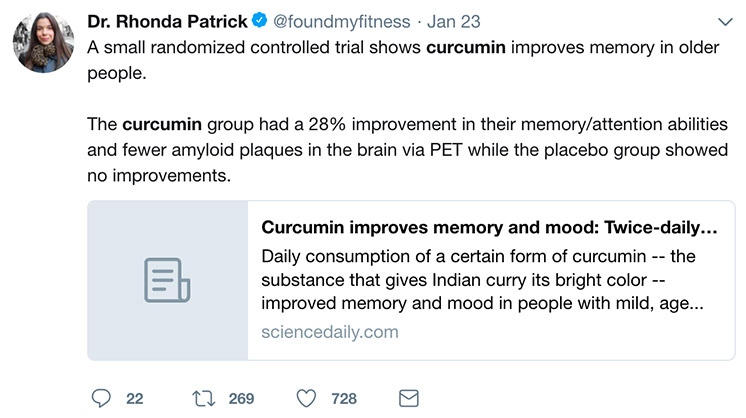 Curcumin appears to have benefits in reducing depression.

Hi John, thank you for the information. I would like to buy Thorne curcumin but not sure if I should pick SF or HP. Can you please give an advice? Do you know which one is more potent? Thank you.

Hi. When you say SF – you mean Meriva? The SF in the name Meriva-SF just means “Soy Free”. By HP, do you mean Theracurmin? I think the jury is still out on which are the most bio-available forms of Curcumin. Both Meriva and Theracurmin are better absorbed than standard curcumin – so you should expect results with either.

Hi Sam. I’ve been keeping the main Rhonda Patrick Supplements List post more up to date, and have neglected this one a bit.

Yes, she still takes it, specifically the Meriva formulation. She takes it intermittently for its anti-inflammatory effects, and also to help with menstrual discomfort.

hello,
can you just supplment this without an pain and healty(25yo) just for benefits?

Rhonda is currently supplementing curcumin daily for its anti-inflammatory effects. In addition, she also has talked about using it for premenstrual pain (in place of NSAID painkillers like neurofen).

I dislocated my shoulder and am looking for ways to aid recovery. I’m not asking for medical advice, but would the anti-inflammatory effect of curcumin interfere with the “good” inflammatory responses going on in my body right now?

I’m curious as to how the balance is struck between allowing the body to have an inflammatory response and taking anti-inflammatory.

Hi Dave, thanks for the comment. I delayed answering this until I could sit down and do some more research. Unfortunately I won’t have time for the foreseeable future, so thought it best to reply briefly now. As you mention, inflammation is absolutely essential to the body, both in dealing with outside invaders, and in repairing damage to the body. So we do want it. So how does curcumin play into that picture, in particular with regards to injuries? The honest answer is that I don’t know. I can see solid rationale for using it for dealing with unwanted inflammation… Read more »

I read that Theracurmin is the most bioavailable form of curcumin. I am now taking theracurmin and BCM-95 curcumin/ ginger from Life Extension and I am getting some good results from the combination.

Hi Ignatius, thanks for the message. Glad to hear the curcuminoids are helping. How are you measuring your results?

With regards to theracurmin, it’s definitely right up there in potency. List in order of strength, low to high is:

There hasn’t yet been a randomized control trial with Curcumin Phytosome vs Theracurmin, so it’s impossible to say which is better… Yet.

This is amazing! I’ve been using turmeric for health reasons. Looks like I’ll be considering curcumin supplement. Thanks!

Hi Sarah! Thanks for the comment, hope some of the info was useful. Would be interesting to see if a curcumin extract provides greater benefit than the turmeric you’re using currently. I’ve learnt through trial and error that just because something has good results in scientific studies, doesn’t guarantee it works for me (n=1 is always highly variable). Btw, nice niche site you’ve built around sleep 🙂