Previously we looked at Rhonda’s diet and the supplements she takes. In this post we’ll look at her exercise routine + scientific reasoning behind it. We all know that exercise is good (no-one but Donald Trump seems to argue with that), but it can be extra motivating to learn the scientific benefits.

Each week Rhonda aims to include:

Resistance/Strength Training – Maintains or increases muscle mass, strength & power – all of which decline without training 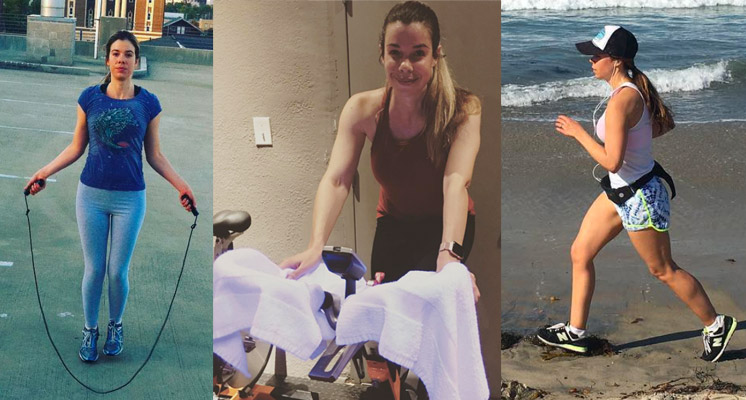 Rhonda usually goes for a 3 mile run about 3x per week – in part for the cognitive boost it gives her. She notes that when she has a big decision to make, or when something is causing her anxiety, she’s especially enthusiastic to go for a run.

Rhonda: Aerobic exercise (which is what endurance training is) has been shown to increase the growth of new neurons in the brain by two-fold1The Effects of Aerobic Exercise Intensity and Duration on Levels of Brain-Derived Neurotrophic Factor in Healthy Men – Schmolesky et al. (2013). Aerobic exercise even starting in mid life has been shown to almost completely reverse the structural changes that occur in the brain with aging. 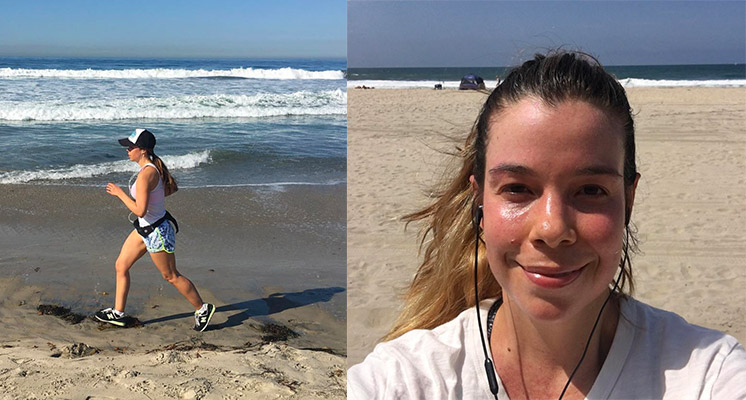 Rhonda talks about using spinning and squat jumps as methods of high intensity training. She picked up spinning after the birth of her son – and thinks it played a role in helping avoid postpartum depression. If you’re not familiar with spinning, this link explains more. 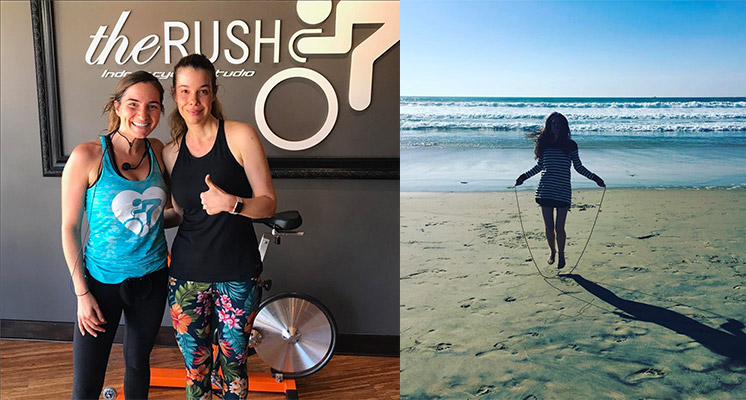 Rhonda lifts some weights and does lunges and squats with weights 2-3x per week.

Rhonda: It is really important to maintain muscle mass. Starting in middle age, people lose between 0.5% to 1% of muscle mass per year. One study involving over 300 twins speaks to the importance of the legs in particular: greater strength and power in the legs in particular was associated with an increased brain volume 10 years later and less brain aging in over 300 twins3Kicking Back Cognitive Ageing: Leg Power Predicts Cognitive Ageing after Ten Years in Older Female Twins – Steves et al. (2016). Other fitness measures besides that of the legs, such as forced expiratory volume or grip strength, were not associated with brain aging when leg power was excluded. Other lifestyle and health measures such as frailty and telomere length indicated that reverse causation is not likely. To get right down to it: don’t skip leg day.

As mentioned above, Rhonda uses yoga and ballet stretches to maintain and improve her flexibility. On top of all the mobility benefits that come with staying flexible, stretching has also been shown to slow tumor growth in mouse models. 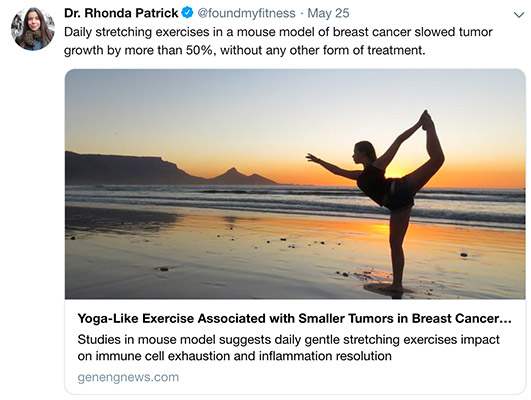 Rhonda on Further Benefits of Exercise

The role of neurons in the brain is communication and processing. In our constantly evolving world, these neurons need constant renewal in order to keep up with developments. One of the bodies signalling mechanisms for neuronal growth is called “brain derived neutrophic factor”, or, BDNF for short. In the study cited by Rhonda below, it shows 20-40 minutes of aerobic exercise triggered a 32% increase in BDNF. Thus we have a natural tool we can use to trigger neuronal upkeep and renewal.

See this footnote4The Effects of Aerobic Exercise Intensity and Duration on Levels of Brain-Derived Neurotrophic Factor in Healthy Men – Schmolesky et al. (2013) for the study in Rhonda’s tweet above.

Anecdotally, many runners (and other aerobic enthusiasts) may notice that exercise is a good time for memory processing and consolidation. The below study cited by Rhonda, they were able to show that people who exercised for 15 minutes after learning a new motor skill (i.e. something involving movement) performed better than those who did not. As Rhonda points out, the benefits were only shown after a sleep (sleep being another great memory consolidation mechanism). 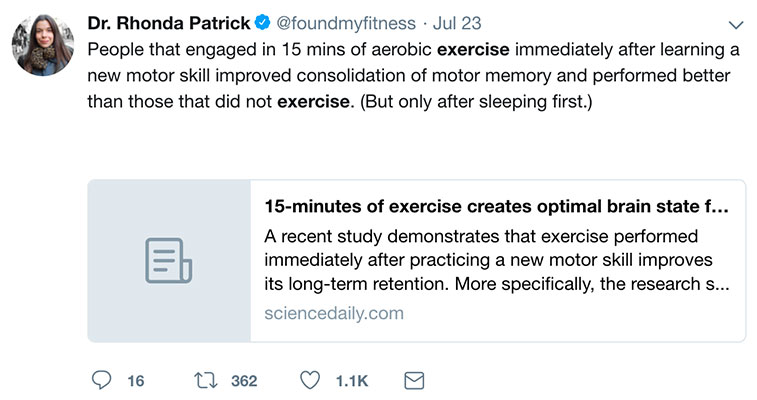 In a study of people’s lifestyles, tests showed that those who partook in regular high intensity exercise had on average 9-year younger telomeres. Telomeres being the caps on the end of our DNA strands, there to protect the DNA from damage. Analogous (kind of) to telomeres are phone cases; we use these to take the brunt of the damage when we drop our phones. And as long as the phone cases are in good condition, our phones are safe. But should the phone cases get damaged or worn down, it leaves the precious contents of the case vulnerable to damage. Likewise, should our telomeres wear out completely, our DNA is highly vulnerable to damage also.

Something interesting, tangentially related to this is the idea of aging itself. For a long time I used to think that it was possible to use a single proxy (such as telomere length) in order to measure biological aging. In fact, it’s not true. A good analogy to our physical aging is the aging of a car. Measuring the wear and tear of any single part of the car does not give us a comprehensive indication of the cars age. For example, if we looked at the well-kept body of the car, we might think it in great condition, but we would miss the worn out brake pads, that at any minute could go. Likewise, with humans, we can use a variety of markers for biological aging. However, it’s very hard to get a comprehensive picture, given that there are so many areas that are aging.

See this footnote6Physical activity and telomere length in U.S. men and women: An NHANES investigation – Tucker et al. (2017) for the study in Rhonda’s tweet above.

As we age our immune system declines naturally – we’re all familiar with the idea of the elderly being vulnerable to illness that their younger selves may have shrugged off.   The study below that Rhonda cites, shows older people who exercised regularly exhibited immune system function they would expect from people 30 years their junior. 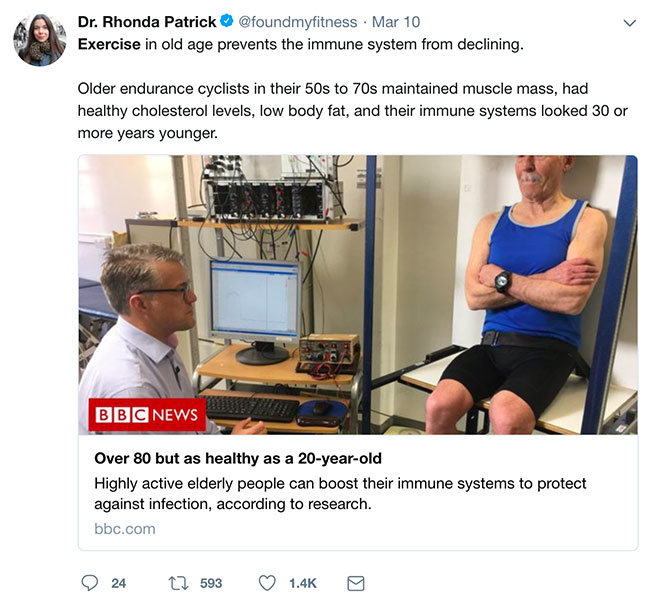 See this footnote7Major features of immunesenescence, including reduced thymic output, are ameliorated by high levels of physical activity in adulthood – Duggal et al. (2018) for the study in the article above.

As we age we lose muscle, which can lead to problems further down the line with reduced mobility and increased frailty. One method of delaying these muscle loss effects is to keep exercising into later life. The study Rhonda cites below shows how all types of exercise stave off muscle aging. 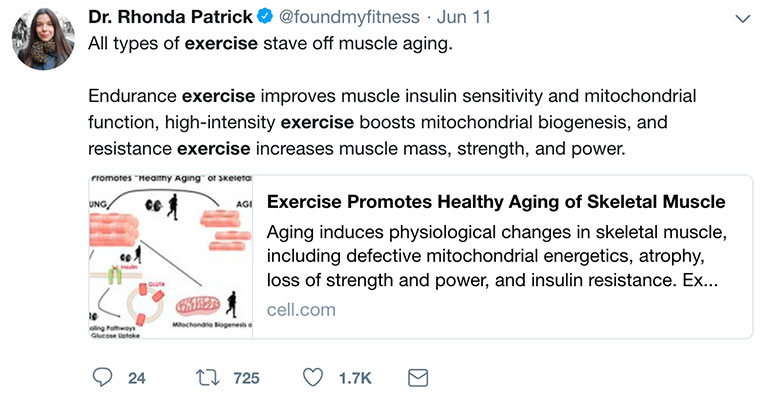 See this footnote8Exercise Promotes Healthy Aging of Skeletal Muscle – Cartee et al. (2016) for the study in Rhonda’s above tweet.

Hopefully that’s given you a window into how Rhonda views exercise, why she does what she does, and the potential benefits you can get from it.

If you value the research and content that Rhonda is putting out, consider signing up become a premium member on her site. Firstly, this crowd sponsored support allows her to continue to work independently, without being reliant on sponsors or grants. Secondly, premium members get a number of exclusive benefits, including members only emails, monthly Ask Me Anything live streams and open access to use her genetics reports.

If you’re looking for more Rhonda Patrick content, below are some further posts I’ve written: