The Conor McGregor diet clearly yields some impressive results. In this post we’ll take a deep dive into the way Conor eats, and the coaches who have had an influence on this. Of course, its important to note up front that he works out LOADS compared to your average Joe, so that’s a huge factor as to his physique. But… after digging into his diet – he does some interesting stuff that we can all learn from. 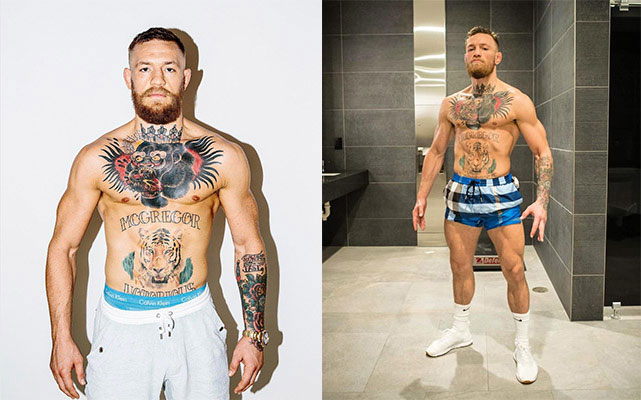 Conor has some general dietary principles he follows, which he laid out in a Men’s Health interview:

As we’ll go into detail later on, Conor primarily eats:

And it’s not just what he eats, it’s also the timing (keep reading to learn more).

But he admits he has a weakness:

“I have a sweet tooth — that would be where I’d put on some weight out of fighting, if somebody brings in a pack of cakes and coffee.”

To dig a bit deeper into Conor’s diet, we need to go back to the sources.

His original key dietary influence was his head coach John Kavanagh. Then John Kavanagh got George Lockhart in to take over – George would plan & prepare all Conor’s meals during a fight camp.

George has managed Conor’s diet since UFC 194, including for the recent Mayweather fight. George has also coached the likes of Jon Jones, Rory MacDonald and Dustin Poirier with their diets.

Before we dig into the details, lets look at the types of meals Conor eats: 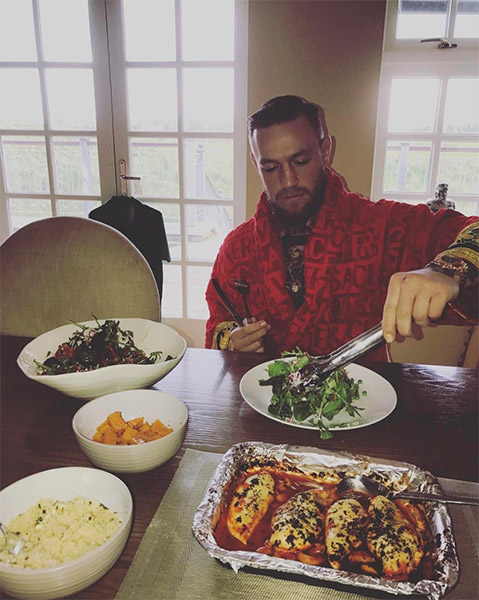 Conor feasting on what looks to be marinated chicken breast, salad greens, sweet potato and rice. 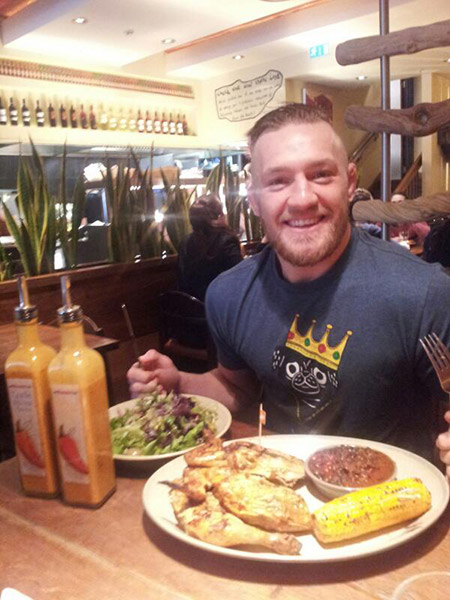 Conor eating chicken, corn and salad at Nandos. Avoiding the fries to keep it clean. That or he moved them out of the picture! 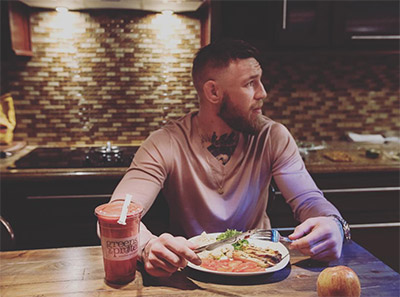 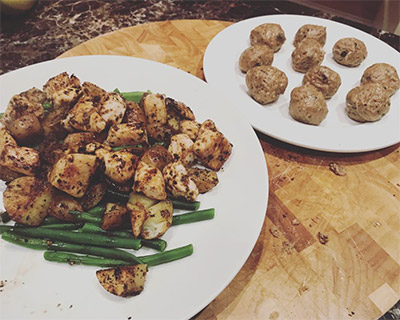 Conor’s dinner – chicken with green beans. According to a video Conor also posted, those brown things that look like potatoes are a kind of peanut butter energy ball.

Next we’ll look at meals that Conor’s diet coach George Lockhart made for Conor in the lead up to his 2017 fight with Floyd Mayweather. These are in chronological order, with the last meal about a month out from the fight. Therefore none of these meals were used when Conor was prepping for weigh-ins – at which point he was cutting weight and likely had to eat less. 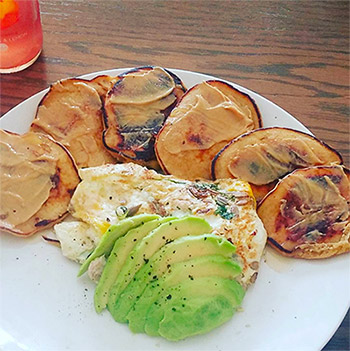 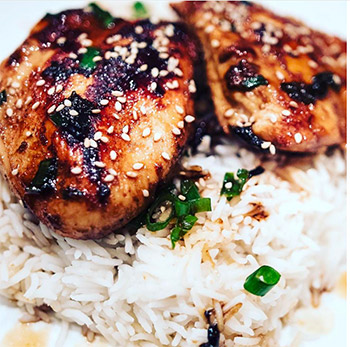 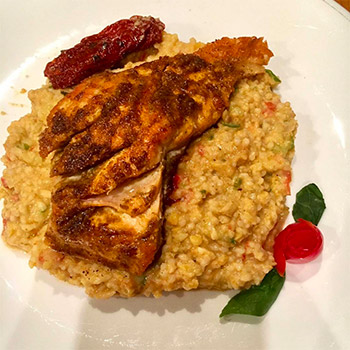 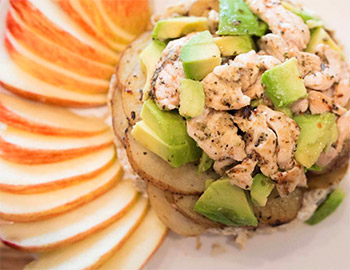 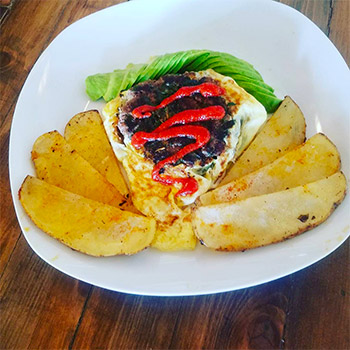 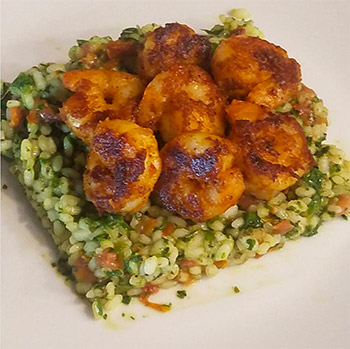 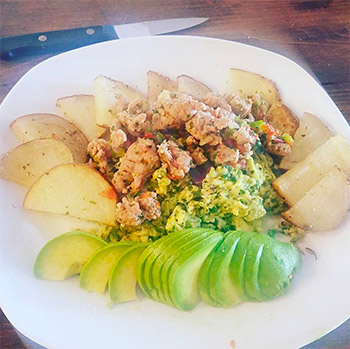 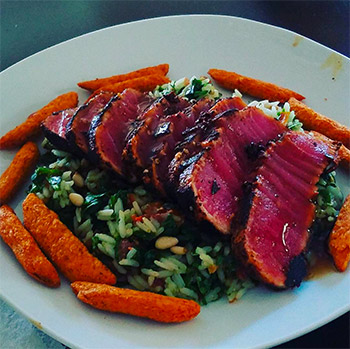 Above Left: Sliced potatoes, sliced avocado, scrambled egg with spinach and (possibly) cauliflower
Above Right: Red tuna steak with smoked paprika, chili powder, salt and pepper, 1 min each side, 20s on each end, on a base of rice, with sweet potato fries 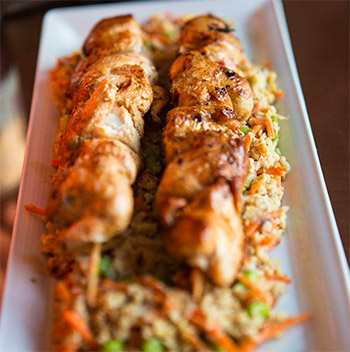 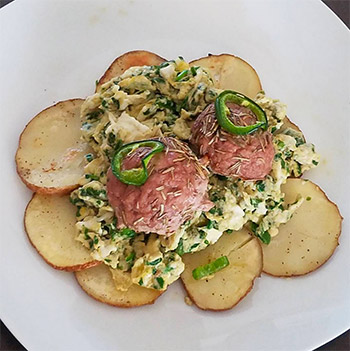 Before Conor started working with MMA diet expert George Lockhart for UFC 194 – he already had a solid influence for how to eat.

His head coach, John Kavanagh, who Conor has trainer with his whole professional career, has a very simple approach to diet, which he shared with Bloody Elbow:

“You know, a diet is super simple. I can tell you mine right now in one sentence. If it had a face or it grew, then it’s pretty much okay, and stay away from processed food. It’s just that simple.”

And again, in a tweet (below) John further emphasises this strategy, showing a fridge full of healthy foods: 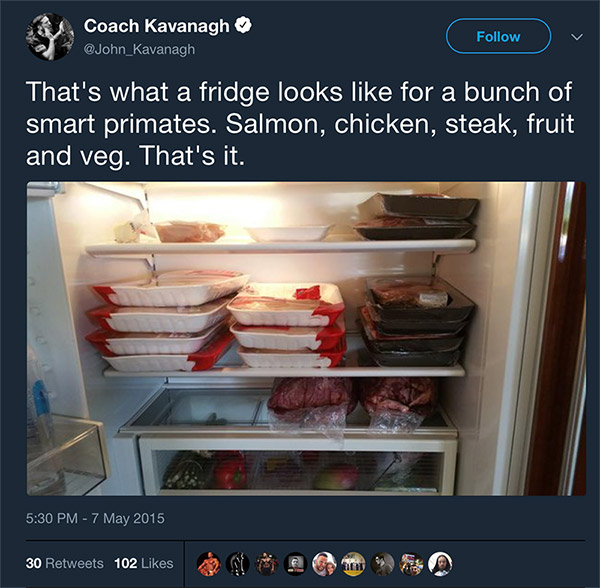 Conor’s Head Coach – Preaching on Twitter about how fighters should eat. 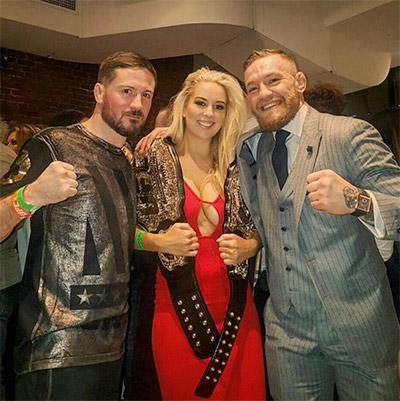 Whilst John Kavanagh isn’t as well known in MMA circles as Greg Jackson or Firas Zahabi – he nonetheless has achieved phenomenal success as Conor’s lead coach. 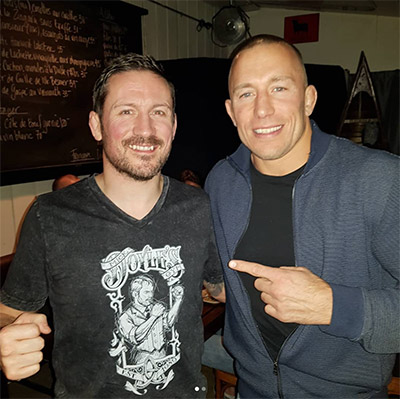 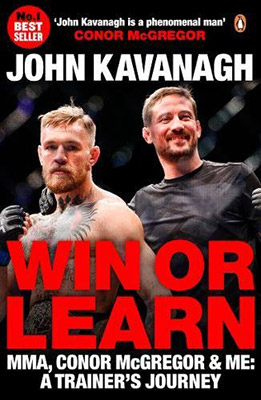 In addition to this, Conor approaches everything with a students mindset. In February 2016, he posted on Instagram that he was reading the Sirt Food Diet: 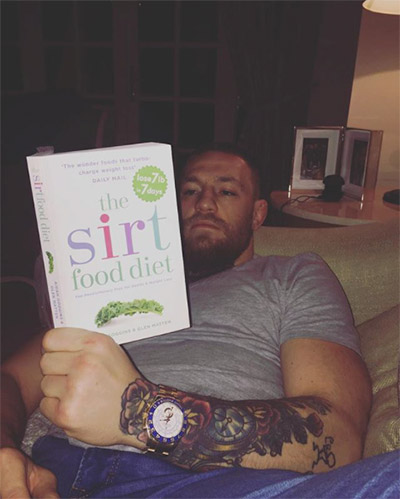 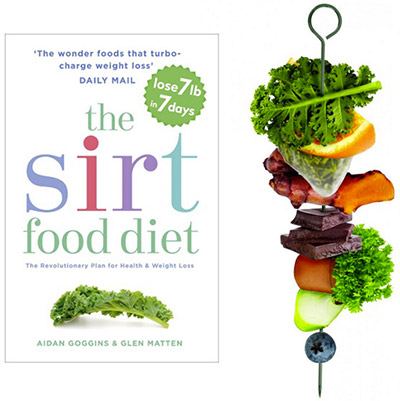 Conor doesn’t appear to follow the diet strictly. For example, in the lead up to recent fights, his diet coach George Lockhart has complete control over his diet. Thus, its reasonable to believe that Conor was simply reading the Sirt food diet to educate himself, rather than following it religiously.

The idea behind the sirt diet is that there are certain foods which activate sirtuin proteins. These sirtuins are said to:

Sirt foods include things like green tea, dark chocolate (85% cocoa content or greater), turmeric, kale and blueberries. It’s likely that Conor has integrated some of these into his diet since.

Three weeks out from Conor’s first fight with Jose Aldo (UFC 194), Conor’s Head Coach; John Kavanagh reached out to diet expert George Lockhart to see if he could help Team McGregor. That collaboration led to the easiest weight cut (to 145lbs) Conor has had, and they’ve worked together since. Not only a nutritionist, George is also a former US marine and MMA fighter. 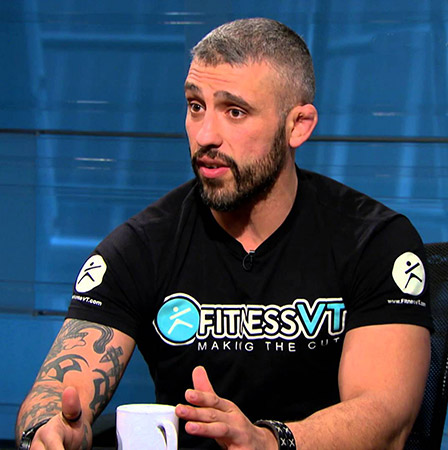 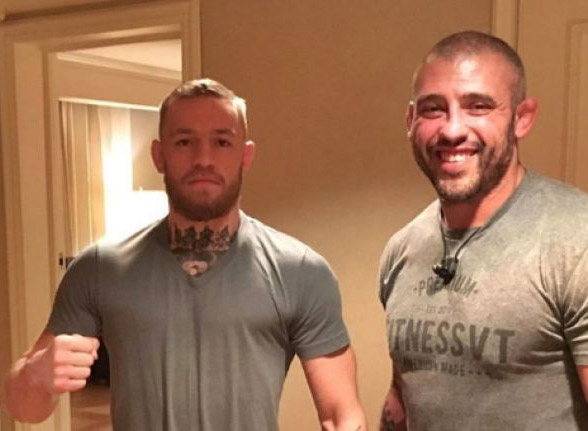 The way George works with fighters is to come into their training camp, and take complete control of their diet in the lead up to weigh ins. In an interview with Ariel Helwani, George explains how he goes shopping 4-5 times per day when preparing food for Conor. He explains that he has to be flexible, based on what kind of training Conor is doing that day, and what weight he’s at, he’ll cook and prepare different things:

Generally speaking, George’s diet principles are the same as we discussed at the start. He focuses on good quality meats, fish, vegetables and complex carbohydrates. He isn’t afraid of simple carbohydrates; but emphasises they should be reserved for post workout recovery.

Below we’ll dig into how George looks at macronutrient food timing to optimise our hormones; insulin and glucagon. I’ll explain in my own words, because I haven’t found a good source where George explains it from the ground up! Although if you browse his various videos on YouTube it amounts to the below (más o menos).

George on Insulin & Glucagon for Training

Insulin is the major energy storage and growth hormone we can trigger through diet. Specifically, through the consumption of glucose containing foods such as simple and complex carbohydrates.

The way George times carbohydrate intake is to spike insulin after a workout, rather than before.

This has the benefit of signalling to the muscle cells and liver to replenish energy stores and start the muscle repair process. 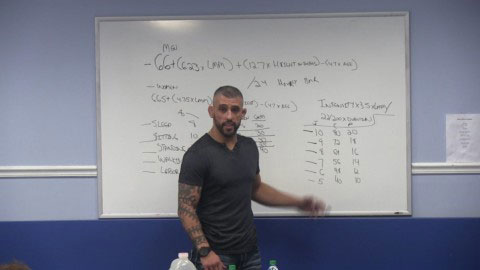 George teaching nutrition at one of his seminars

In practical terms, this means avoiding simple carbohydrates before a workout (saving them for the post-workout refuel).

Instead, pre-workout, he uses protein or fruits (fruits contain both fructose and glucose). Whilst fructose is a sugar, it doesn’t cause an insulin spike, instead being metabolised in the liver. Thus the fruit is useful because it boosts liver glycogen stores (useful for explosive exercises), without causing a large spike in insulin, that you would get from simple carbohydrates like bread, rice and pasta.

Specific fruit examples George uses are apples, blackberries, strawberries & grapefruit (source). And then if there is a longer time period pre-workout, enough to get a meal in, he might opt for vegetables to accompany the protein such as spinach, broccoli & asparagus.

A hormone that does the opposite of insulin, is called glucagon. Whilst insulin operates by lowering blood glucose, shunting it into muscle and fat cells, glucagon instead signals to the body to release glucose and lipids into the blood stream for use.

Insulin is actually an inhibitor of glucagon. Thus, if you consume simple sugars pre-workout, and want your body to have quick access to energy stores, having high circulating levels of insulin dampens your glucagon release. Thus it makes more sense to consume protein and fructose sources immediately pre-workout. Of course, if you’ve got 2-3 hours before your workout, you can consume glucose containing foods without them interfering with glucagon release – this is because your insulin will have dropped back down to normal levels by the time you work out.

As we’ve discussed above, Conor tries to get all his nutrient needs from “real foods”, rather than resorting to many supplements.

That being said, he has discussed using BSN shakes for post-workout recovery. In his Twitter post on the subject he didn’t mention the specific BSN product, but there’s a high chance he’s using their popular recovery products like CellMass 2.0 and AminoX. CellMass 2.0 combines BCAA’s, creatine and glutamine – whereas AminoX is predominantly amino acids. 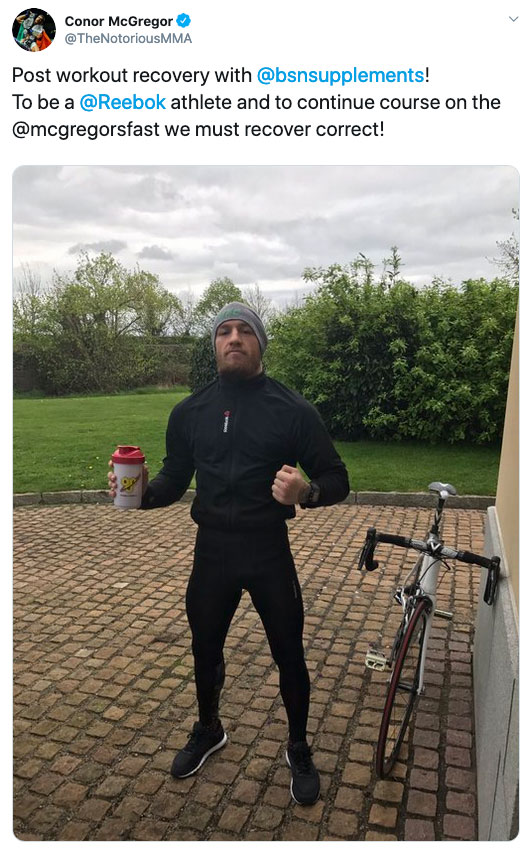 I like running, I’ve been running my whole career. I always do fasted cardio. I like training on am empty stomach because… it takes you someplace. Puts you in a different mindset, you’re in… survival mode almost, you’re on the hunt.

It’s what I like doing, it brings my weight down. Then you add in the desert heat, that dry air. Then as the fight comes closer I pack more clothes on to get that extra bit off. It just adds more intensity to it.

It puts me somewhere, where I need to be for this. I’m just visualizing the moments, the sequences, there is no face I’m picturing, it’s just a blank face, and a particular body.

See the Youtube video below to watch Conor talking about fasted cardio: 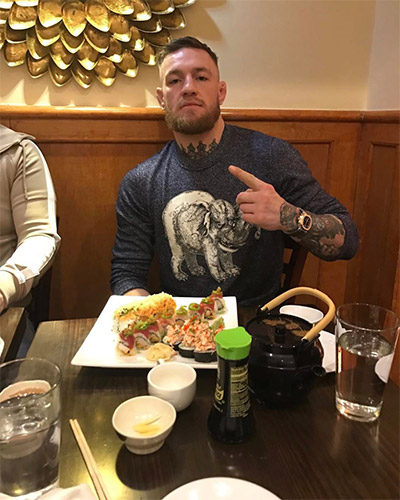 Conor eating restaurant Sushi – possibly a bit of a cheat meal compared to the strict meat, vegetables & complex carbs he sticks to when training for a fight. 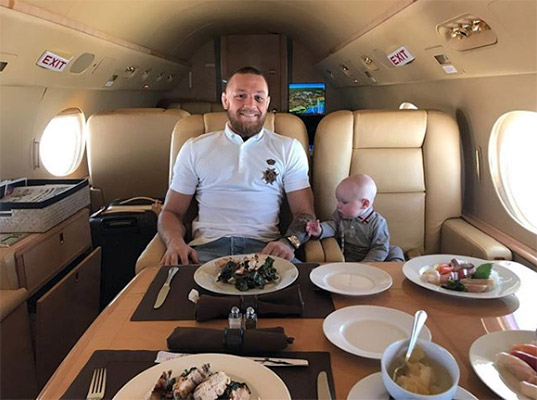 Eating chicken and cooked greens on a flight to Ibiza. Whilst his son makes a grab for his big watch.

Above we’ve covered a lot of the details around Conor’s diet and routines.

If you’ve suggestions for things I’ve missed or ideas for improvement, leave them in the comments below.