When I first heard about Rhonda’s paper on ApoE4, Alzheimer’s & Omega-3 Phospholipids – it sounded important, but I had no idea what it was about. For a start, I didn’t know my ApoE4 allele’s from my MSFD2A transporters – so it was an uphill challenge to understand.

In this post I’d like to cover what I’ve learnt from it, and hopefully, make it seem more digestible for others who are also new to the subject.

Who does this apply to?

This research only applies to ApoE4 carriers, which may make up 20% of the general population.*

The only way to know if you carry ApoE4, is to perform a genetic test (saliva sample based), to sequence your SNPs. The most commonly used for this purpose are 23andMe & Ancestry. At the time of writing it’s noted on the SNPedia ApoE4 page that Ancestry misreports rs429358 (which is relevant to ApoE4), so it may be worth using 23andMe until that is resolved.

*It’s not clear exactly how many people carry the ApoE4 allele. Rhonda’s paper quotes ~25% of the population, citing this paper as the source1Gene dose of apolipoprotein E type 4 allele and the risk of Alzheimer’s disease in late onset families – EH Corder et al.. But looking at the paper (and I could be wrong), it doesn’t appear their sample size is enough to draw any conclusions on prevalence of ApoE4.

Why is Rhonda’s paper important? 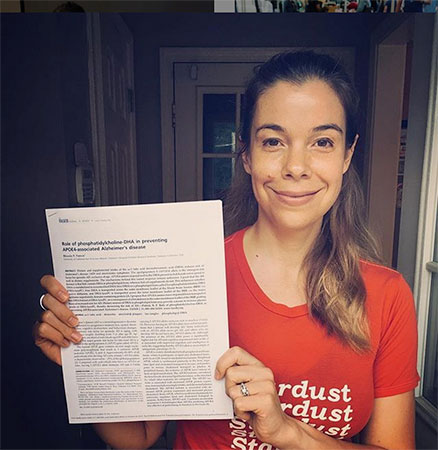 Rhonda with her freshly published paper in Oct 2018 (source).

Having 1 ApoE4 allele confers a 2-3x increase in Alzheimer’s disease risk, and having 2 ApoE4 allele’s confers up to a 15x risk (the most one can have is 2 allele’s).

I don’t need to tell you that this is very undesirable. Alzheimer’s sucks for all involved. It currently makes up ~70% of all dementia cases2Plasma Phosphatidylcholine Docosahexaenoic Acid Content and Risk of Dementia and Alzheimer Disease, The Framingham Heart Study – Ernst J. Schaefer et al (2006).

Rhonda’s paper proposes a way to reduce this risk through the consumption of fish, fish roe (fish eggs) and/or phospholipid DHA supplements (rather than regular DHA supplements).

Which would be fantastic.

For Rhonda, her ApoE4 research is close to home. She reportedly carries at least one ApoE4 allele herself.

How does the solution work?

It would be wrong to pretend we fully understand how Alzheimer’s develops. But we do know that there are 3 hallmarks:

Something that affects all 3 of these hallmarks is DHA levels in the brain. DHA being the essential omega-3 fatty acid that comprises ~30% of the fat (lipids) in the brain. Higher levels ameliorate the above 3 hallmarks, lower levels increase them. 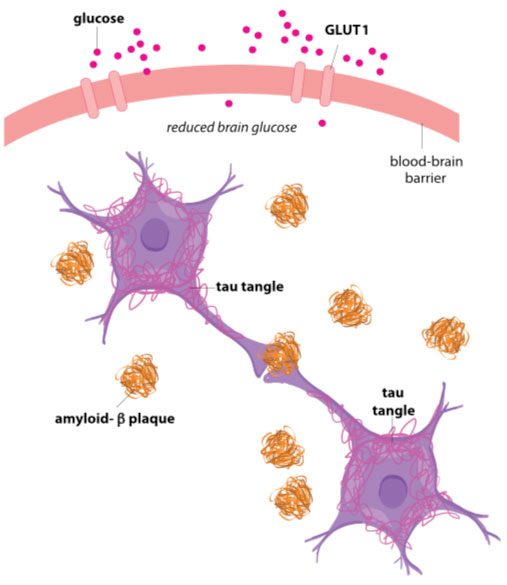 An illustration from Rhonda’s paper showing the 3 hallmarks of Alzheimer’s disease in one picture. (1) Reduced glucose uptake in the brain. (2) Tau tangles inside of neurons. (3) Amyloid-beta plaques in the space between neurons. With (1) & (2) disrupting neuronal synaptic transmission.

So the next question becomes… how do we get more DHA into the ApoE4 carrier brain?

Typically, we would eat fish or, consume fish oil supplements, in order to achieve adequate amounts of DHA. There are plant sources of DHA, but the absorption pathway is unfortunately inefficient in humans.

In ApoE4 carriers, it appears that fish oil supplements are not effective, but fish itself is. Why might that be? What does the fish have that the fish oil does not?

Rhonda proposes that this is due to the following: 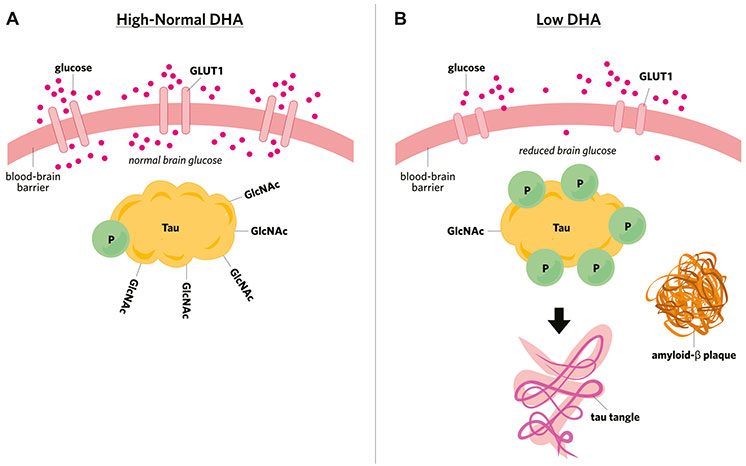 Another excellent illustration from Rhonda’s paper, showing how low DHA reduces the GLUT1 transporters. These are key for glucose transport through the blood brain barrier. With reduced brain glucose, we get more tau phosphorylation (the green Ps in the right image), resulting in more tau tangles (not good). Reduced glucose also results in more amyloid beta plaques – but the image above doesn’t show the mechanism.

So, what’s the upshot?

The upshot of all this is that ApoE4 carriers can potentially reduce their Alzheimers risk by consuming more omega-3 phospholipids. In practice, this means eating things like: 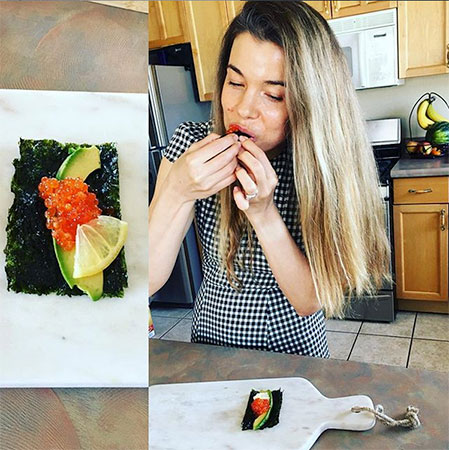 A great resource for those with ApoE4 are the ApoE4 forums, where there’s lots of informed discussion and ideas around the topic.