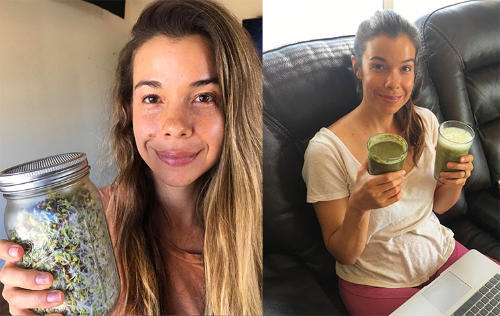 The What & Why of Sulforaphane

Plants contain chemicals which are used for their self-defense (phytochemicals). Generally, plants evolved these chemicals to be toxic to organisms smaller than humans (for example pathogens). Thus, what may be toxic to a pathogen, has a lesser effect on a human. Ingested in small amounts, some of these phytonutrients exhibit positive effects in humans. But if you consume them at high amounts; they become toxic. This is referred to as hormesis, or, the hormetic effect – and is illustrated by the image below: 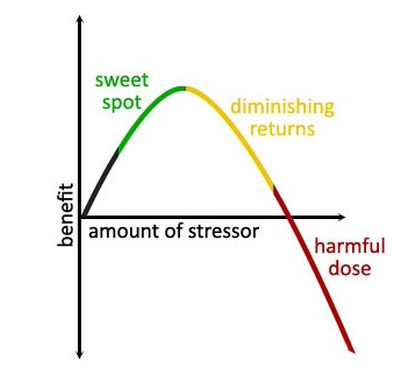 Bringing this back to sulforaphane, which is a product of a chemical reaction between glucoraphanin and myrocinase, the glucoraphanin itself is a plant-based phytonutrient that triggers a positive hormetic affect in humans.

Specifically, ingested sulforaphane activates what’s called the NRF2 pathway, which increases expression of a battery of cell protective genes, that regulate things like:

And that’s just a snapshot, NRF2 affects even more. This information comes via an incredible paper by Christine Houghton et al. (source) – which is highly worth reading. 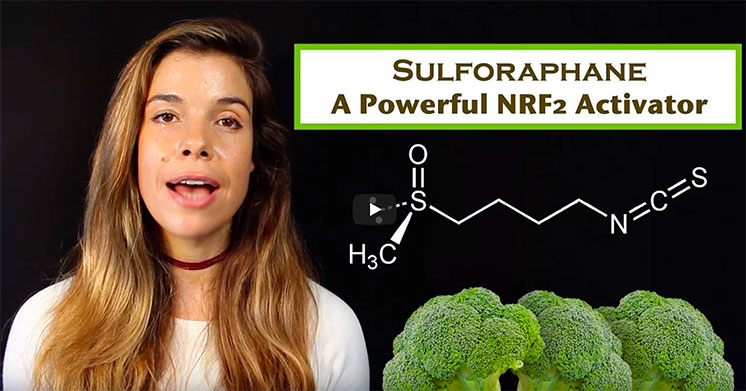 As a result, sulforaphane is under continued study for its potential role in life extension, cancer prevention and more.

To learn more about Sulforaphane, see Rhonda’s highly detailed video on the subject.

Whilst the ultimate low-cost alternative to high end sulforaphane supplements is sprouting your own (see below), often this can be inconvenient. It takes time, preparation, and isn’t always possible when travelling or busy with work.

Since Rhonda had a child, her time is more limited, and at least for now she is opting to take sulforaphane as a supplement – rather than sprouting her own.

Below we’ll look at the best sulforaphane supplements on the market. 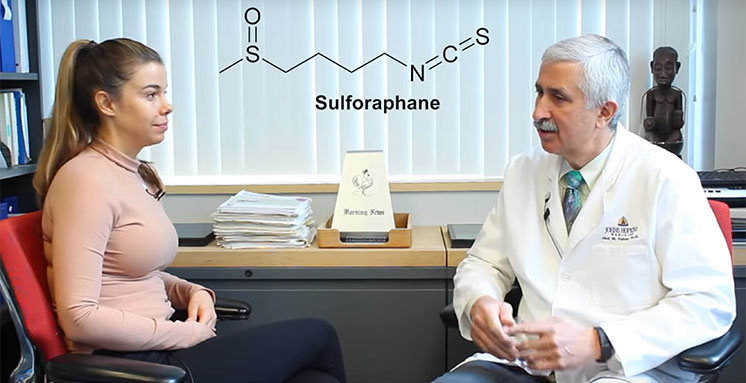 When Rhonda has the time, she opts to get her sulforaphane through self-grown broccoli sprouts. Sprouts are easy to grow with a bit of initiative. To emulate Rhonda’s exact broccoli sprout growing setup you’ll want:

Its been pointed out in the comments that a number of broccoli seed retailers are, in fact, selling “Rapini/Raab/Rabe” seeds – marketed as regular broccoli speeds. Turns out they’re actually a different family of brassicas than regular broccoli (calabrese etc) – despite looking vaguely similar when fully grown. Until research says otherwise, we don’t know if they contain sulforaphane, so it’s worth watching out for (to avoid) when buying seeds. The sprout house seeds linked above, according to the seller, are “usually the cultivar Calabrese” (link) – which is a regular broccoli type that will contain sulforaphane.

Out of curiosity I bought both seed types, in case it was possible to visually tell the difference between the unsprouted seeds (it’s very hard) – you can view the pictures here. In hindsight I should have sprouted both at the same time and checked if you can tell the difference as they’re growing.

See Rhonda’s IG post for the size of mason jars she uses, and see her video on heating sprouts for brand of jars. She was previously running 6 jars in rotation, freezing them in ziplocks as soon as they’re ready. However, more recently (mentioned in her August 2018 crowdcast) she has stopped freezing them, instead opting to put them in the fridge post-harvest. This is because (for unknown reasons) her and her partner Dan were finding they had stomach distress on the sprouts consumed from frozen, compared to if they consumed them fresh.

Rhonda harvests every 3 days, based on research from Jed Fahey, suggesting the sprouts contain more glucoraphanin whilst young. 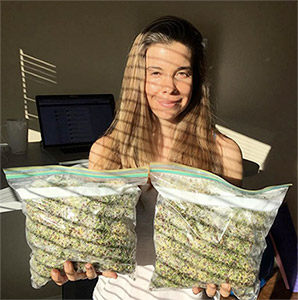 Rhonda suggests that the best data we have on dosage comes from the clinical trials done. She references these 3 in her sulforaphane video:

Rhonda said (on her last Tim Ferriss podcast) she consumes up to 4 ounces (113g) of broccoli sprouts a few times per week.

In terms of consuming them, you’ll probably want to emulate Rhonda, who adds the sprouts to smoothies and blends them in her Blendtec – to mask the taste with other flavors. You want to avoid juicing, as this will discard the pre-biotic fiber that is beneficial to our gut microbiome. 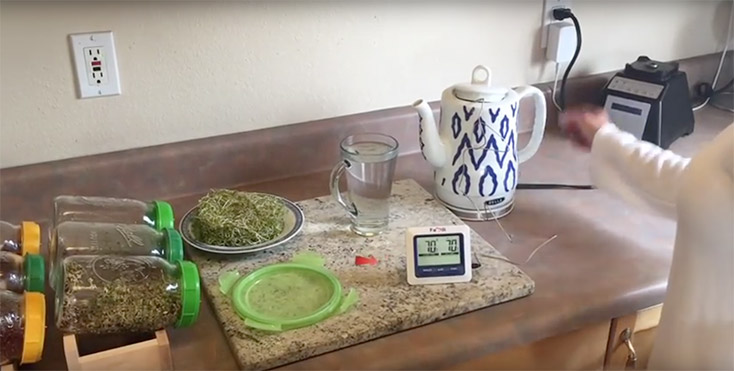 Rhonda had previously created a video on tripling the bioavailability of sulforaphane in the sprouts via heating. However, after discussing the process with John Hopkins researchers Jed Fahey, she has since stopped it – based on Jed suggesting that this is not necessarily. This also avoids the risk of overheating the sprouts, and therefore disabling the myrocinase enzyme – which would be sub-optimal.

Jed Fahey of John Hopkins University, one of the leading researchers in sulforaphane/NRF2, warns us to be careful of which supplement we use. His lab, which has analyzed dozens of supplements over the years, has found that many are terrible, and don’t contain what they say they do. For more info on Jed, see Rhonda’s interview with him.

To complicate matters, there are 3 main ways to consume sulforaphane:

Below is a list of the sulforaphane supplements tested and used by Jed Fahey’s team at John Hopkins University in their clinical studies:

Until recently there was only 1 company making a free-form stabilized version of sulforaphane, called Prostaphane. 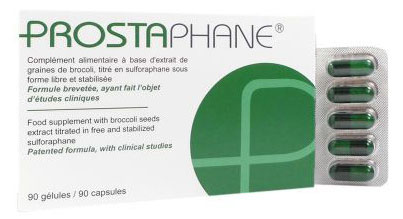 Unfortunately it was only available in France, and Rhonda was having to ship it over.

Fortunately it’s now available in the US under the brand name BROQ – and it’s what Rhonda is using.

This page of Broq’s site explains a bit more about their collaboration with the company behind Prostaphane (Nutrinov / Triballat Noyal).

BROQ contains 10mg of sulforpahane per capsule and Rhonda currently takes 2 capsules per day (after a meal, never on an empty stomach). 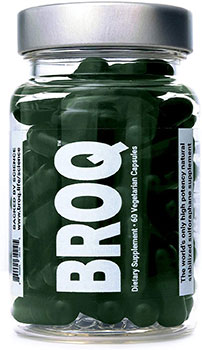 Prior to the introduction of BROQ, the best alternative to Prostaphane was a product by Nutramax Laboratories called Avmacol. It contains glucoraphanin (sulforaphane glucosinolate) extracted from broccoli seeds, alongside the activation enzyme myrocinase. 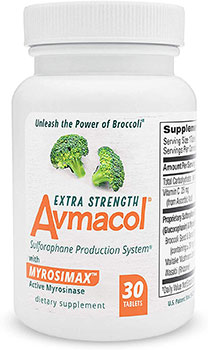 The last sulforaphane supplement that has been tested by Jed Fahey and his team is Thorne’s Crucera-SGS. This contains glucoraphanin (sulforaphane glucosinolate, or SGS), but doesn’t contain the additional myrocinase enzyme. Interestingly, our guts do contain bacteria that convert glucoraphanin into sulforaphane. The amounts vary from person to person, and aren’t as optimal as consuming additional active myrocinase. 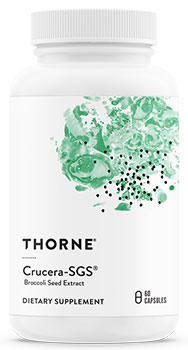 A benefit of using supplements over home grown sprouts is for situations where risk of infection must be minimized – including pregnant mothers and those with compromised immune systems. Home grown sprouts run the risk of bacterial contamination, if they’re not kept completely sterile, whereas sprouts processed into supplements do not carry this risk.

Rhonda started taking Moringa in 2020 – which stemmed from Jed Fahey’s research at Johns Hopkins. Moringa is derived from the leaves of the Drumstick Tree, which are harvested, dried and then powdered. It contains an isothiocynate with similar properties to sulforaphane, called Moringin. 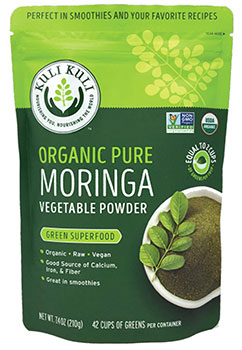 In Jed’s studies using Moringa, participants consumed it as a cold-brewed tea. This can be made by adding moringa to room temperature water and leaving to stand for at least 10 minutes. They suggest a ratio of 1:100, powder to water. So for example:

The reason for not making a hot tea, is that the myrocinase enzyme in moringa is sensitive to heat, and its important to preserve it. 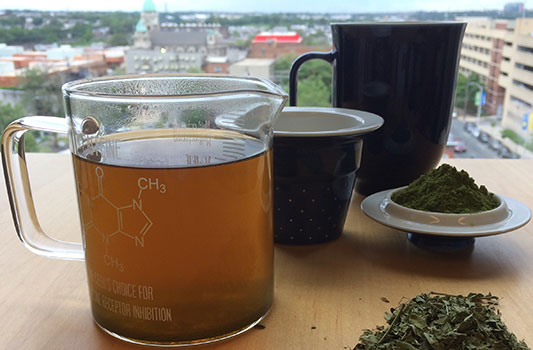 ^ Above image via Jed Fahey

In terms of which Moringa to use, Jed’s studies used Kuli Kuli Moringa. He notes in their FAQs that excessive sunlight or heat after harvest will rapidly degrade some of the phytochemicals and vitamins of interest in the leaves – so it’s worth caution when sourcing.

Whilst quite a lot of money, time and research has been put into looking at sulforaphane and broccoli sprouts, Moringa research is still in its infancy.

To my knowledge there aren’t human studies that have robustly determined what dose of moringa we should be aiming at for various benefits.

The suggestion by Jed (see below) is to use at least a teaspoon of moringa powder for daily dosing. 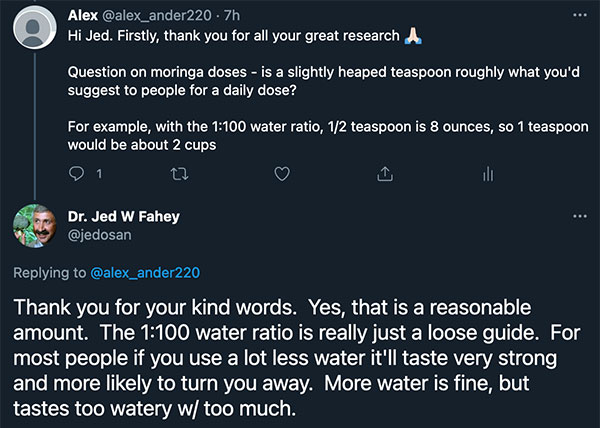 In Rhonda’s December 2021 Q&A she confirmed that there are no equivalency studies yet.

She says she personally uses a heaped tablespoon of moringa powder. Yes, tablespoon, not teaspoon – it’s quite a lot!

So we’ve covered why sulforaphane might be of interest, and the different forms that Rhonda takes it in.

If you’ve further questions, please leave them below in the comments.